The Origin of God Welcome to my site. My name is Dennis Gilmour and I live in the small city of Medicine Hat, in the province of Alberta, in the country of Canada. I can be directly contacted at dennis@theoriginofgod.com if you have any questions or comments to make about what you are about to read. What I describe here is called the "Theory of Christoevolution", which I must call a theory because I have no way to prove it, other than to say God speaks to me, and I "just know". But neither is the traditional theory of evolution provable in an absolute sense. Down through the centuries, many people have said "God speaks to me", which typically just spawns cults, so I encourage my reader to decide for themselves. I am a Christoevolutionist, for I know there is something to Christ but also something about evolution that is true. I hope you read further and discover the flavor of what I mean.
Introduction

Hello and welcome to my site, which proposes to tell you just about all you ever wanted to know about God and more. I am an author of a fiction book that explains much of what I am about to reveal in prose form. The book is called "The Unveiling" and hardcopy is available for a nominal amount at www.theunveilingbook.com, The Story of Open Contact, and a deeper understanding of the hidden meanings of the book is available by clicking one of the book images below, and also free online access is available there as well: 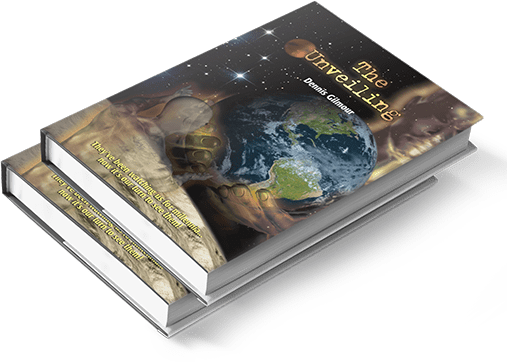 I will get right into a huge topic for today's world. The only two explanations as to how we all got here is the somewhat credible theory of evolution over billions of years, or some sort of God and/or "gods" created everything. People have tried, unsuccessfully, to marry the two concepts in some sort of theistic evolution, but it just doesn't work. All Holy Books have creation stories of various sorts and claim inspiration from God, but only the Bible has credibility as authored from a legitimate Higher Power, based on easy to understand fulfilled prophecy alone. And pure evolution or even theistic evolution cannot be true, as the Genesis account in the Bible clearly says God created this universe in a literal 6 days and rested on the 7th day, approximately 6000 years ago, and death came from Adam's sin, rather than death is some wonderful biological life-creation force over billions of years (at least death as creation force is NOT true for this reality, but WAS true of Christ's reality, where we all originate).

Also, just looking at it from a scientific point of view, evolution and deep time are proven false in many ways,(for this universe anyway) but the biggest weakness in this theory is, if it were true, there should be thousands of transitional species in the fossil record showing slow change into different species. But there are no such conclusive fossils, rather only a small handful of highly disputed ones! See Creation Ministries if you need more scientific convincing, as this site specializes in refuting ALL evolution and deep time ideas, not just this one small point about lack of transitional species. Click HERE for a good specific article from this site demonstrating the lack of fossil record evidence, and how evolutionists simply continue the spin/reinterpretation/redefinition game to justify their wrong belief, unwilling to admit evolution and deep time wrong for this universe. This common human tendency to rationalize/justify/redefine erroneous "truth" shows the real issue is really that people just want to believe there is no God to which they are accountable, and choose to create arguments and "evidence" to rationalize this position. Of course, God already knows this as He says "the wrath of God is revealed from heaven against all ungodliness and unrighteousness of men, who suppress the truth in unrighteousness," (Romans 1:18, NKJV) and it is spiritual warfare (a battle of the mind) to get people to admit the obvious truth, which this verse confirms humans tend to suppress, that God exists! This creation/evolution debate is all just more spiritual warfare, which helps God's elect develop critical thinking skills, but also confuses and deceives the masses. Spiritual warfare is not just debating scripture, but ANY debate around ANY truth perspective. But debating scripture or evolution (the only other explanation to counter the "God created everything argument") are more obvious forms of spiritual warfare, because they strike right at the core issue that only God knows all things and can define truth about origins, or any truth at all actually, which Christ said He was the truth (John 14:6)! All creatures in the fossil record show as if instantly created supernaturally, and the Genesis account in the Bible confirms God did just that. People just don't want to accept that, because of the implications of then having to believe God on other things the Bible says. Click HUMOR for a mainly funny, yet also serious, response I gave to a lame insult from a science editor named Rob, at www.answersinscience.org, when I inquired about his willingness to reconsider his site's dedication to evolutionary dogma.

Nonetheless, though I know young earth creation is true, both origins beliefs have some intuitive sense about them, and there is intentionally planted sufficient spiritual warfare "evidence" for people to "spin" to support either belief. The purpose of this "evidence" is to test people in general, and create what the Bible calls "God's elect", who develop spiritual warfare critical thinking skills to eventually see through the deception. God has revealed to me what is true of these two concepts in another dimensional reality, where we all originate and the spiritual war there gave rise to issues being worked out in human history. My site explains all this in depth, and what God and Satan are really up to, and all the important issues the elect of God need to know. But before reading further, might I suggest click the video link you will find in my youtube account below for a good video introduction of two key concepts everybody is going to soon need to understand before all of the increasing worldwide UFO activity culminates in open contact with alien-gods (demons). The rest of this site is dedicated to fleshing out details from the video.

Follow us on social media about this and more:
Alien-gods (demons) videos posted on the various media as well
Preamble

When confronted with the mysteries of existence, those who don't believe in some sort of personal God generally subscribe to the modern scientific view that the universe came into existence at a cosmic "big bang" explosion billions of years ago, and everything (including life forms) subsequently evolved slowly through natural processes spanning these many billions of years. In his book The Origin of Species, first published in 1859, Charles Darwin was the first to successfully popularize this concept of evolution in relation to organic life. Ever since then, Darwin's biological evolutionary beliefs have been hotly debated between two general camps: those who believe in a personal Creator and those who don't.

If evolution is true, then it is logically possible that other beings exist in the universe farther along the evolutionary scale than humans, the veritable "gods" humans have always worshipped, and in fact, humans are evolving to such a state as well. If these beings exist, they might have interacted with ancient man and influenced our beliefs about God for some grand great purpose that humans were too immature to comprehend at the time. Mankind has technologically advanced greatly in the last 100 years or so, but are we advanced enough in our consciousness to fully assimilate information aliens might bring us about our concepts of God? Are aliens going to openly show themselves one day soon and help mankind understand the mysteries of our and their existence?

On the other hand, many people would be fearful and suspicious of open contact with aliens. The Bible and other ancient religious texts speak of the existence of dark forces of evil that oppose a very real and personal God, and also speak of a great cosmic struggle between a devil and this God. If open contact occurred, would you believe these aliens to be "demons in disguise" trying to deceive mankind for some evil purpose? Or might there be good evolutionary explanations as to why our cosmic "parents" led mankind to believe in the existence of a devil and demons, as well as a God and angels? Read on to help you discover the truth on this matter and prepare you for the future, for like it or not, open contact is coming!

Fair Use Disclaimer Fair use refers to the right to reproduce, use, and share copyrighted works of cultural production without direct permission from or payment to the original copyright holders. It is a designation that is assigned to projects that use copyrighted materials for purposes that include research, criticism, news reporting and teaching. When a project is protected under fair use provisions, the producers of that project are not subject to sanctions related to copyright infringement. The maintenance of fair use protections is central to many non-profit and education projects, especially those that operate in digital and online spaces.

This website may contain copyrighted material, the use of which has not been specifically authorized by the copyright holders. The material is made available on this website as a way to advance teaching related to critical thinking and religious understanding, as well as other salient political and social issues. Through context, critical questioning/thinking, and educational teaching, www.theoriginofgod.com, therefore, creates a transformative use of copyrighted material. The information/material is presented for entirely non-profit educational purposes. There is no reason to believe that the featured information or material will in any way negatively affect the market value of the copyrighted works. For these reasons, the owner of this site believes that the website is clearly covered under current fair use copyright laws.

The site owner does not support any actions in which the information or material on this site are used for purposes that extend beyond fair use. For additional information on copyright law and fair use, please visit www.copyright.gov/fls/fl102.html