Meetup to talk UFOs and all the implications 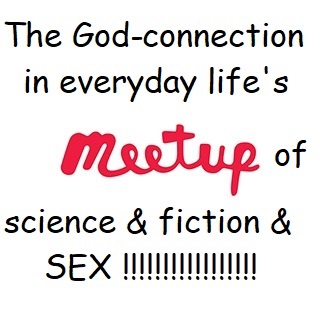 FOR THOSE WHO WANT TO MEETUP & DISCUSS DEEP THINGS

For those who come to this meetup chapter from internet links, I encourage you to read my site from the beginning. I have been told my writings are rather deep and esoteric and fascinating, but also many say crazy and nonsense and boring. Obviously, if you are coming to this page from meetup.com and you're a mature adult over the age of 18 (and meetup.com requires this even to be on their site), you can decide this for yourself. Front entry of this site is at Alpha, and my way of thinking might make more sense if read from the beginning. Back entry of this site is at Omega, and this link has good summary information/launch links, but also has real-time chat where one can often catch me online instantly, if one has any questions.


Since I was never taught anything about how that so-called "evil religion" has any relevance to real life, and all of Canadian society seems to have similar dismissive attitude, I had to learn the hard way from the school of hard knocks called real life that that "evil religion" is very relevant to every thought/word/deed of everyday life, but in parabolic/symbolic form that most seem unaware of. Having attacked & bitched & complained on the real God for significant answers to the theology of suffering, God eventually "explained" the truth to me by experience. I don't expect my way of thinking to make total sense unless one has had similar experience(s) in life. Nonetheless, for a variety of reasons, I consider myself a facilitator of deeper implications and decided to start some meetup groups (in addition to this site) to attempt to start wider personal one-on-one discussions about "God's deeper ways" than seems most understand. My motivations are my continuing education through verbal expression, learning from others' experiences/words, perhaps make a few friends, practice for open contact, training others for this event too (who realize there is more going on than meets the eye), etc..., but I am not out to "save souls". I enjoy deconstructing religious lies, not perpetuating them. An Almighty loving Heavenly Father does NOT need my help, or ANY created being's help (ie angels) to do ANYTHING. Just because God gives us something to do, does not mean He needs us to do it. Just because God gives us something to do, does not mean He needs us to do it. That's why salvation itself is NOT based on anything we do, but rather what we believe. I believe what I just wrote and that is deep mature faith and salvation "evidence" right there to know such a thing. Nonetheless, I have put much effort and time into creating this site, but I didn't have to in order to "save my soul" (or anybody's for that matter), and my efforts count nothing towards my salvation, which is a free gift from God. I just did it because God asked me to and I can; this site is unlike anything you will ever encounter. We learn from our mission/experience and ultimately profit. It is for our benefit, not God's. Yes, religious organizations lie in order guilt/manipulate money out of naive people for their own gain. No, they do not have good motivations to do this. Yes, God does have good motivations for allowing this and all suffering and all evil. I talk confidently about a literal open contact event, but I have admitted on other pages of my site that allegorical open contact has already occurred for the world; although I can see other more seemingly natural ways the whole endgame could play out, I still strongly believe in a literal open contact event, because of the many reasons I detail on other pages. People generally diss the supernatural too much, but I've had enough legitimate supernatural experiences in this matrix reality to know ANYTHING is possible. Those experiences helped inspire this entire site actually.


Having been born in Canada, I well understand the cultural attitude here is "keep that religious nonsense in your church or private home, as we all know it is a proven scientific fact that we all evolved from apes and there is NO God." I take the mantra a step further and keep it in my private meetup group, but perhaps if there is enough interest, we can start our own unique brand of open air preaching one day. I'm not sure where God is going with all this, but have enough faith to KNOW it is somewhere good. I've learned the hard way not to put blinders on to initial thoughts that come to mind. It is not exactly illegal to do such in Canada, but everybody already knows the superficial gospel about Jesus and doesn't really listen anymore. The true gospel is radical and may or may not have some takers in my local area. I'm trying to test this idea out.


Our meetup group's spiritual warfare debates will probably go many different places, but I desire to keep these three main points in the front of our minds:


So, I hope my readers have a good sense now of what I am about, and I hope there are a few brave souls out there who might risk being a part of a meetup group with me. The easiest way to contact me is simply leave a message on the green chat in the middle left of the screen. I will get back to you about further details. Check my scheduling site webcalendar for places and times for public meetings that anyone is welcome to join at any time.