The parable of the postman 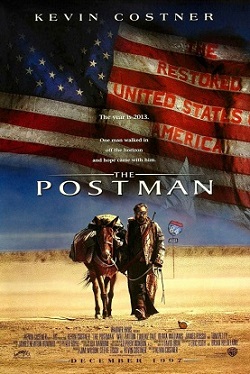 THE PARABLE OF THE POSTMAN

If you have not seen this movie, please read this wikipedia write-up.


The Postman is a 1997 American post-apocalyptic action adventure film produced and directed by Kevin Costner, who plays the lead role. The screenplay was written by Eric Roth and Brian Helgeland, based on David Brin's 1985 book of the same name. The film also features Will Patton, Larenz Tate, Olivia Williams, James Russo, and Tom Petty.


It is set in a post-apocalyptic and neo-Western version of the disestablished United States in the then near-future year of 2013, sixteen-plus years after unspecified apocalyptic events, led by Nathan Holn, progressing to war, followed by plagues, that collectively left a huge impact on human civilization and erased most technology. Like the book, the film follows the story of a nomadic drifter (Costner) who stumbles across the uniform of an old United States Postal Service mail carrier, and unwittingly inspires hope through an empty promise of a "Restored United States of America" (symbolically the Restored Kingdom of God) and starts his path to become a national hero.


Released on Christmas of 1997 from Warner Bros., The Postman was a major critical failure and a box-office bomb, grossing a total of $20 million worldwide. It was nominated for three Saturn Awards but won all five of its Golden Raspberry Award nominations including Worst Picture. Despite the movie failing at the box office, God spoke some messages to me through it.


This is a symoblic story about the destruction humans experience here on earth, after being cast out of heaven for our preexistent rebellion as fallen angels. Nations, especially decent ones like the United States, represent the Kingdom of God, where we all came from and where we all will eventually return, shown in the movie when the United States was restored.


In the movie, the destruction of America represents the spiritual war all humans have subconscious memory of from preexistence. We find ourselves drifters on this earth, like Costner's character, unable to find peace and struggling to survive by evil means, like Costner lies after finding an old mailbag and postal uniform; he starts telling stories about how the United States has been restored and he is delivering mail for the new nation. Costner represents the elect who start telling parital "lies" about the Kingdom of God early in their walk, as their faith is weak and they don't deeply believe--symbolism/parables approximate truth but always have flaws, so you must use your spiritual mind to understand my interpretation. It takes much time and spiritual warfare with very real (but invisible) demons to grow deep in faith and understanding. Costner claims things are still shaky in the new America so he must ask for food and shelter for a time, in exchange for his services (ie new elect start their walk greedy and want money/fame to serve the Lord--whereas now all material is free on my site). People believe his story and it starts to inspire hope. As Costner visits towns, word spreads of the Restored United States and builds hope for freedom from the local oppressive feudal Lord, General Bethlehem (ie Satan the devil). This leads to conflict and Costner eventually abandons his game to save his life (all elect fall away for a time). After some adventure with a woman named Abby, the postman returns to the towns to find an impressionable young man continued his cause by also pretending to be the new postman. Claiming to work closely with the Restored United States, this young man builds a network of postal offices and young recruits start delivering mail and spreading hope about a fantasy America that doesn't exist, but starts to rise from the ashes, hope creating the new Restored United States almost like magic. Costner takes up the cause again, starts a war with General Bethlehem, and eventually defeats Bethlehem and the General's men defect from the "evil" cause and help Costner build the new Restored United States.


This movie happens on an individual basis for each elect, but will happen literally on a global scale one day, as a literal manifestation of the Kingdom of God on earth is due to arrive soon (Restored United States). Unlike Costner, who told lies and had no evidence, I have posted much evidence of General Bethlehem's (ie the devil's) UFOs in the skies, prepping for open contact. I've seen the end of the "movie" and I know how this goes. The postman and his postal carriers represent all elect in history, who came to understand the things I have come to understand and write about.

Side note: Christ and the early church came to understand too, and the New Testament records the good start but eventual defeat of the spiritual church into obscurity, just like in the movie General Bethlehem initially defeats Costner. Tons of physical churches are in every nation, but the true spiritual church has only ever been connected in spirit (mind). I talk with Christ daily, and I am with Him even now, as He walks ancient Israel doing His thing for Father God. Christ was thinking of me too, and all of us, 2000 years ago. The true elect are always connected in the spirit, though we lose connection often and walk in the flesh too. But it is not always so. I enjoy getting into spirit mode and staying there as long as I can. My site is both a preview for others AND also something I am living with my future self.

We human elect are the Restored United States! The unique postman (Christ) inspires hope in our individual end-times and we all become dedicated "postmen" as well; on earth, we rise from the destruction the United States (ie human elect, aka incarnations of fallen angels, having once been part of the Kingdom of God) experienced before even coming to this planet. We replay the spiritual drama of rebellion/war, in the context of our short physical lives, inspire hope in ourselves and others like the postman did, eventually defeat General Bethlehem (ie devil, carnal mind from preexistence--also the literal devil soon) within the heart and the General's men (individual carnal minds and world as a whole) turn to the side of God's spirit and eventually assist us to build the kingdom of God within individuals (within the heart) and the world as a whole. This drama will have a more literal enactment upon UFO open contact, where the devil and his demons will pretend to be "highly evolved ancient alien-gods". Although deceptions and battles will rage, and Costner and Bethlehem will have it out, Costner eventually wins and the literal Kingdom of God will be established on the earth. A literal Kingdom manifestation for 1000 years on this earth, but still only a reflection of the true Kingdom after physical death.


Costner marries Abby and they have children, meaning Christ's spirit will fully reproduce during the millennium! Abby, the wife of "Christ", said her husband had a gift to dispense hope like candy from his pocket. We hot polygamous wives of the Lord, called the reformed human elect, think so too!


General Bethlehem's Law of 8: the code he used to rule his clan with an iron fist


Costner's character used to belong to the General's clan, so he invoked Law 7 and challenged for leadership of the clan. In their code of battle, if you could kill the clan leader, you became the new leader. Costner defeated Bethlehem, and said, "I'm leader of the clan now! There's gonna be new laws." Then he said, "Law ONE: No more killing!"


I have also challenged for leadership of the clan, and defeated Bethlehem (ie the devil), meaning I expose Satan's lies on this site in multitudinous ways. I am rewriting the laws now, as leader of the clan. Eight symbolizes circumcision of the heart, as physical Jews circumcised their male boys of the 8th day after birth. Spiritual circumcision occurs much later in life and physical circumcision is only symbolic of this spiritual experience. The number eight remarkably characterizes the gospel. Since in the week there are seven days, the "eighth" day and the "first" are obviously the same. Now, it was on the "first day of the week" that Jesus rose from the dead (Matthew 28:1). Number 8 in Bible is a new beginning, it is a number of hope, new horizons and bright future. It is connected with Jesus and his resurrection, as he was resurrected on the 8th day after he was chosen to be the one who will be sacrificed for the sins of humanity. 8 people were saved in the ark to continue human race and reboot the humanity, leading to new beginning. After this number 8 is a number of new beginning, salvation and triumph. After the resurrection he showed himself to other people, believers, his disciples and Mary Magdalene 8 times before ascending. After creating this universe in a literal 6 days and resting on the 7th, comes the 8th day of new heavens and new earth. The 7th day of 1000 years of Sabbath rest for all humanity is almost here (2 Peter 3:8)! I am already in my eighth day and as new leader of the clan, here are the "postman's" new laws.


The Postman's Law of 8: the code we elect live by