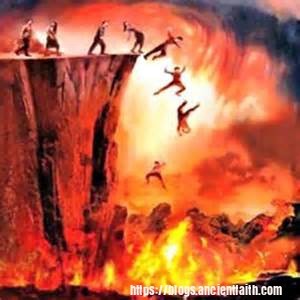 THE PARABLE OF OVER THE CLIFF

A man named Dennis was walking along a nice paved path through a beautiful forrest garden in a park, all kinds of pretty exotic plants and trees to amaze his senses. As he walked along the path, he looked forward trying to see the end, but the path met up with the distant horizon, seeming to go on forever. So he kept walking the path, unconcerned it would end, for he could not see the end. Little did he know, the path met up with the horizon in such a way as to create the illusion mirage that the path went on forever, but really at some point, it abruptly ended at the edge of a cliff. Once over the cliff precipice, there was a drop of several meters straight down, which met a very steep and rocky hill that led about a mile down, and ended in a burning garbage dump labelled with a sign that said, "Gehenna burning garbage dump."

Of course, Dennis did not pay enough attention to where he was walking, too distracted by the pretty scenery to notice any danger, did not notice the abrupt drop, and went over the cliff. He predictably screamed in terror and shock as he went over the cliff, fell the several meters straight down, hit the rocky hill and tumbled down the steep hill, getting cut and bruised and broken bones on the mile journey to the bottom. He tumbled right into the Gehenna burning garbage dump, and burned for several seconds, before being pulled out by several workers, who said it was their job to try and rescue people who went over the cliff. He was taken to hospital and took years to recover and heal from injuries and third degree burns, and mental problems, depression, anxiety, PTSD, etc...from his experience.

Once recovered, he tried to sue the owner of the beautiful forrest garden park for creating such a hazard and not warning people of the dangers. He was shocked to learn the government would not allow the man to be successfully sued, as the park was protected by special laws, and the park was intentionally setup as a test for selected people, who are allowed to enter the park. He investigated deeper, insisting on more answers what this test was all about and why the government did such a thing. Upon further learning, he understood, but still did not like it. He begged for opportunity to at least be allowed to walk the path with people, giving hints and clues at least, to help them possibly avoid a painful fall like he experienced, and possibly death, as many do not survive it. The government allowed him to do this, and upon adequate training of what he could say and how to say it, he was allowed to walk the path with people. To his chagrin, with experience he came to understand even more and agree with the government this test was unfortunately necessary. None listened to him, his hints and clues, and all went over the cliff, some surviving and some not. In frustration, he would sometimes break the rules and just outright tell people the path was a mirage and they were headed over a cliff if they didn't wake up and listen to him. All people got angry and typically spouted, "Shut up! That is your truth! You don't shove your truth down my throat! The path goes on forever stupid. I can clearly see that." He started to feel like the government agents who created the test, and the owner who owned the park, and had less and less sympathy for morons who reject a little friendly warning and get what they deserve. One time he even waited until a man was just about to step over the cliff and grabbed him by the scruff of the neck, preventing his next step that would send him over the cliff, and forcing his head to look down the dangerous and sometimes fatal journey that awaited his next step. Amazingly, the man did not appreciate what Dennis did, acknowledged the cliff precipice existed and was dangerous and could kill him, but could only focus on Dennis' somewhat violent physical action to grab him by the scruff of the neck and force his head to look down. The man screamed how Dennis dare not violate his right to not be aggressively touched and threw himself over the cliff in defiance.

Dennis learned the hard way that people are assholes and get what they deserve, including himself. Pissed off at people's stupidity, he changed strategies for a while and just before the cliff, he would distract people all the more, pointing to the sky at an eagle or something, but ask them to keep walking to ensure they went over the cliff. In time, he got bored with even this, realizing all who enter the park must go over the cliff, and he does not need to try and deceive them to do so. They are already deceived and Dennis cannot change their destiny. Warnings, hints, clues, do not work as human nature is such that people will not listen, outright verbal warnings just piss people off, and aggressive action also just causes people to defiantly throw themselves over the cliff. With thorough understanding now of all the issues surrounding why the government put such a crazy test park together, Dennis decided to join the workers at the bottom of the hill who pull survivors out of the fire and try to help them heal and understand the government's crazy way of thinking.

Explanation:"Everyone will be salted with fire." (Mark 9:49, NIV) Everyone means everyone. Nobody escapes the fire (hell) and everybody is saved by it. In parable form in the Bible, Jacob (Christ) loved His Rachel elect wife (first resurrection destined elect) more than His Leah elect wife (second resurrection destined elect). Rachel elect are salted (saved) now by fire (ie 1 Peter 4:12 "fiery" trials), as we cry out to God for answers and receive them eventually, as I detail on this site. We Rachel elect get these answers/understandings as flesh and blood, but Leah elect are salted (saved) after physical death as spirit beings in the spiritual lake of fire. Leah elect can't even understand a simple parable like this and think it's nonsense, preferring to blaspheme God by calling Him an eternal torturer monster or annihilationist, neither of which is true. Everyone who enters the park represents all humans, and a sovereign God has ways of making all go over the cliff, experience pain and suffering of various sorts in life,(the mile tumble) and the "Gehenna fire dump" of life's fiery trials. Those who survive the fall and get pulled out of the fire and heal and learn to change their way of thinking about the government's (God's) crazy ways represent Rachel elect. Those who physically die (not surviving the fall or burn to death in the garbage dump) in the story represent humans who physically die without understanding these things I write; they are Leah elect, who must physically die and go to this mysterious lake of fire to understand with ease the things I write on this site and never forget. God's ways are crazy and strange but God admits this. "For the Lord shall rise up as in mount Perazim, he shall be wroth (pissed and angry like Dennis became in the story) as in the valley of Gibeon, that he may do his work, his strange work; and bring to pass his act, his strange act." (Isaiah 28:21)