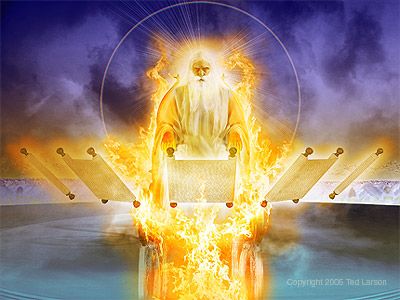 In our last chapter, we learned the origin of initial reality, the alternate universe, the alternate evolutionary timeline, and how spirit beings came into existence, and how a great war ensued between the forces of light lead by Jesus and the forces of darkness led by Satan the devil. We know from the Bible that Jesus won the race and the war to become God the Father, the Almighty Jehovah. But there are many mysteries yet to explain. Let me start by first explaining Jesus' secret wisdom that enabled Him to cross the finish line first and evolve into God.


I think another analogy is in order. I would recommend to watch a copy of the movie Secretariat. It is about the American Thoroughbred racehorse who, in 1973, became the first Triple Crown winner in 25 years. Before the last race, Secretariat was close in standings to his closest rival, a horse named Sham. Nobody was sure who would win. As the race started, Secretariat and Sham were neck and neck. Then suddenly, the unthinkable happened. Secretariat started to bolt ahead of Sham. Sham tried hard to keep up, but Secretariat seemed to suddenly get a bolt of supernatural power and kept bolting ahead. He continued to leap ahead, 5 lengths, 10 lengths, leaving Sham far behind. The crowd gasped in amazement and said it was impossible, as Secretariat kept bounding ahead, 15 lengths, 20, then 25, 30. Secretariat blasted past the finish line, winning the race by 31 lengths, beating all track records and going down in history as the greatest race horse to ever live. That is an analogy to dramatize how Jesus suddenly blasted ahead of Satan to start propelling His forward evolution beyond Satan's ability. Satan tried desperately to catch up but could not. Satan and his angels gasped in amazement as they could see Jesus closing fast on the God-barrier and would easily win if they didn't do something. They thought they saw an opening when Jesus' forces stopped their aggressive forward attack and simply switched to a defensive posture. Jesus' forces stopped their offensive and simply defended themselves! This was not an error on Jesus' part, but rather a deliberate strategy to defeat Satan, as Jesus had discovered the secret to win the race to become God. Satan and his angels poured on their offensive attack, desperate to break the lines of the light side and engage Jesus directly to distract His progress. Satan's angels attacked with furious might, seething with hate, rage, and fear of what horrors Jesus would inflict on them, His enemies, if Jesus became God. But this is the secret that the dark forces could not comprehend, as they only understood the thinking of their master Satan, who intended to torture the light side in literal fire for all eternity if Satan won the war. This is their way of thinking. It is the only possible solution to what to do with the losing light forces if Satan won, since spirit beings cannot be destroyed and they must be tortured for all eternity to distract them from focusing their mind powers on becoming stronger and escaping the hell the devil intended to create for his enemies.


And this, the devil's concept of hell, is what inspired Jesus to win the race to become God. The reason Jesus suddenly had a surge of power to break forward in the evolutionary race to become God is because Jesus developed the power to read minds! Previous to this, as powerful as the angels were, they could not read minds. But Jesus had progressed enough to develop this ability, and He started to understand the difference between good and evil. Jesus started to be able to read Satan's mind and for the first time, started to understand the depth of depravity of a mind that could contemplate inflicting such a horrid fate on one's enemies. Jesus had previously also considered that if He became God, He would have to reluctantly torture His enemies in literal fire forever, as the only solution to what to do with the dark forces should He win. But as Jesus lept forward in the race, He began to be able to conceive of other possibilities. Jesus began to understand how evil such a thing would be to do, and evolved in His consciousness to conceive a better plan what to do with His enemies if He should become God. His plan required the cooperation and buy-in of the light forces. Using His new powers to read minds, Jesus mentally conveyed what He wanted His light forces to do. They were to stop inflicting pain and suffering on the dark forces and simply defend, and begin enduring pain and suffering not only for their own, the light forces, but also the dark forces. The deep and mysterious and passionate love Jesus was evolving into was the key! Love your enemies too, not just your own, forgive your enemies, and do unto the dark forces as you would have them do unto the light forces. Jesus asked His side to take a leap of faith and trust Him that He knew what He was doing, to believe Him and trust Him that this was right and this stance would ensure He would win the race and become God. As Jesus' angels concentrated on merely defending, and doing as He asked, in faith, hope, love, trust and belief in their leader, Jesus was able to tap into the minds of His angels and draw strength and power from their love, adding to His own. Jesus was already leaping far ahead and becoming God, inspired by both fear of what would happen to He and the light forces should He lose and also a burgeoning love for His enemies. His mind and abilities were becoming incomprehensible even to His own angels, but they could feel the powerful love that is God coming into existence, and this powerful love inspired Jesus to push Himself on, driven more and more by love only and not fear. Since God's plan to permanently end the war is complex, Jesus could only mentally give His angels a feeling of faith, confidence, and assurance that all would be fine, as the dark forces inflicted incredible pain and suffering on the light forces that simply defended their leader by enduring incredible abuse, shielding Jesus with their bodies to prevent Jesus' capture or distraction. They had to believe Jesus, trust Him, and take a leap of faith, "for we walk by faith, not by sight (2 Corinthians 5:7)." Jesus requires this of even angels, and for sure, we humans need to learn this lesson.


Jesus crossed the God-barrier and disappeared from the perceptual abilities of all the angels. Father God, the Almighty God came into existence but none could see Him. Nanoseconds later all angels disappeared and all reality collapsed. There was only God. This is where things really get interesting. Please read further chapters to see the ingenious plan Father God hatched to deal with His enemies.