The parable of the English argument 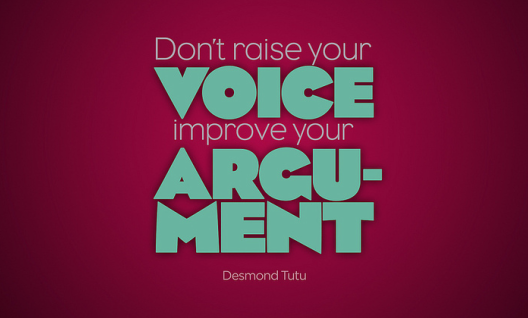 THE PARABLE OF THE ENGLISH ARGUMENT

A man named Dennis was working in his office one day, and a co-worker came in with complaints about a memo he had written. She started castigating Dennis about all the grammar mistakes he made, bad prepositional phrases, inappropriate nouns, pronouns, verbs, and verb tenses, adjective and adverb mixups, dangling participles, etc... Dennis got a little upset and said he had been writing in the English language for his whole 50 years of life and knew what he was doing. She angrily demanded he not talk about English because that must be kept in his English school classroom, but this is work and they were talking about work. Dennis was dumbfounded. He tried to explain how he agreed they were at work, but work deals with English sometimes, the very thing they were arguing about. She screamed that he had to keep his English talk in the classroom and focus on this work issue, the rules of grammar and such. She continued to bash him over the head with grammar rules, but refused to admit they were arguing about the English language. She huffed and said, "If you want to believe in some sort of English language, that is your choice, but keep it in the classroom! We are dealing with your poor work memo here, vocabulary, breaking of all normal grammar rules and such." Dennis was getting frustrated at her stupidity, and said, "You believe in the English language too! Can't you see that is what we are talking about? I've studied English in school and university, and spoken and written it for years, and I think I know what I am doing. I have researched the language, in fact, as personal interest, and know the history of the English language, who created it, their thinking process around creating all the rules, etc... I can tell YOU more about English than you want to know!" She continued to scream that Dennis can't talk about a language called English at work, and called the boss into the room, along with all other workers on the floor, who could hear the loud argument and wanted to know what was going on. The boss and all co-workers also agreed Dennis was not only in the wrong about the poor grammar, but to talk about English at work is despicable and he must keep that shit talk in his classroom. Dennis refused to talk with any of them anymore about breaking grammar rules, unless they were first willing to admit there was such a thing as the FUCKING ENGLISH LANGUAGE TO START WITH! The boss got upset at his angry demeanor and Dennis was fired on the spot.

This parable shows the rather stupid and hypocritical and repressive attitude in so-called "secular" Canada around "religion". The attitude of the boss, and all workers in the office represents the cultural attitude around discussing that evil "religion". The English language symbolizes religion, and how Canadians compartmentalize so much that truth is divorced from religion, and we are told you cannot talk religion (ie truth) at work. People refuse to see their hypocrisy that arguing ANY point of truth, which we all argue over truth at work sometimes, is essentially arguing religion in a subtle way! They argue about what is true and right and wrong about a work situation, and the morality of the issue, while at the same time demanding you can't talk about who defines truth (Christ) and what the truth said in the Bible! Hypocrisy! They want to bash you upside the head with rules of morality, workplace policy and rules, and right and wrong and truth (symbolized by the grammar rules) and yet scream foul if you talk about Jesus, who is the very embodiment of all these concepts! It is stupid hypocrisy of humans in general to argue about nitty gritty details of the truth of a matter (ie nitty gritty grammar rules) and yet deny there is even an English language to start with (ie a God who creates all things, including language and defines truth). Satan's bully world system has people actually convinced religion has no basis in truth and you must keep talk about that in church only, symbolized by the workers' insistence that English (religion) must be kept in the classroom (church). This compartmentalization forces people to engage in a mild form of the psychiatric disease known as multiple personality disorder, where one is forced to put on different personalities, depending on the situation. One is forced to put on different truth hats at work, and in different situations, with different people, etc... Even at different churches one must put on the "gay is ok" hat, but another church may insist you wear the "gay is sin" hat. My truth is the same wherever I go, but I express truth differently depending on people and situations. I always wear the "gay is sin" hat in my heart, as God says so in the Bible, but don't openly express that at work or certain situations or around strangers in general, but with good friends I can be more open and honest. But if specifically asked the truth on that matter, I will answer honestly what God says, at work or anywhere. I will also add that I do my sex sin too, and enjoy it, of course, but I always agree with what God says in the Bible, although I don't always like it either. Most people compartmentalize and will say they just have an opinion on that, while denying there is any objective source of truth (ie what God says in the Bible) on that matter. Even most professing Christians will put their opinion on homosexuality above what God says, and say you can only talk about God's "opinion", as if an all-knowing God only has opinions, on that issue in church if you want. And they don't see their hypocrisy right there, to push their "truth" (ie their "religion") on you that "God's opinions are just opinions and talking about God and Bible is only for church". So everybody in Canada, at work or personal lives, typically argues their truth perspectives relatively freely, but cry foul if you talk about who defines truth and what the truth said in the Bible. This is like arguing about rules of grammar (rules in general always symbolically represent codifications of ideas of truth, Christ), so arguing about nitty gritty ideas of truth, while also hypocritically denying you can talk about the high level concept there is an English language Creator (God), who defines the English language to start with! God is Creator of all things, even language, as the Tower of Babel story tells of how God instantly created all languages on earth to force mankind to spread out over the earth, instead of work together and complete their obsession to reach "to the heavens" and find God. "And the Lord said, Behold, the people is one, and they have all one language; and this they begin to do: and now nothing will be restrained from them, which they have imagined to do." (Genesis 11:6) That is quite an admission from our Creator, that if God had not confused the languages to prevent mankind from working together in our collective obsession to find God, we would have technologically advanced much sooner, and without different cultures and languages, hence less enemies, not wasted so much money and ingenuity on nuclear weapons and other military technology to have reached to the heavens long ago! God prevented us working together and progressing too fast, lest we build inter-dimensional portals and find God and the angel realm, contrary to what God wanted, as He is making points in human history about Satan's angelic rebellion, and fixing things His way, not ours. In my story, Dennis was willing to discuss who created the English language and His mind on the rules (ie discuss God and His mind on Bible rules and meanings/understandings), but not many are willing to see their hypocrisy and do so, but rather Dennis is ganged up on by the majority and weak leaders, who won't see their hypocrisy either. This is like how in real life the majority Leah elect world cannot agree with all the deep truth God reveals to the world through my site, and all the weak Christian leaders also won't see their hypocrisy and agree with God about the things He reveals on my site. I am essentially fired and not welcome around these hypocrites. Only Rachel elect can hear anything of Christ in the things I write and say.