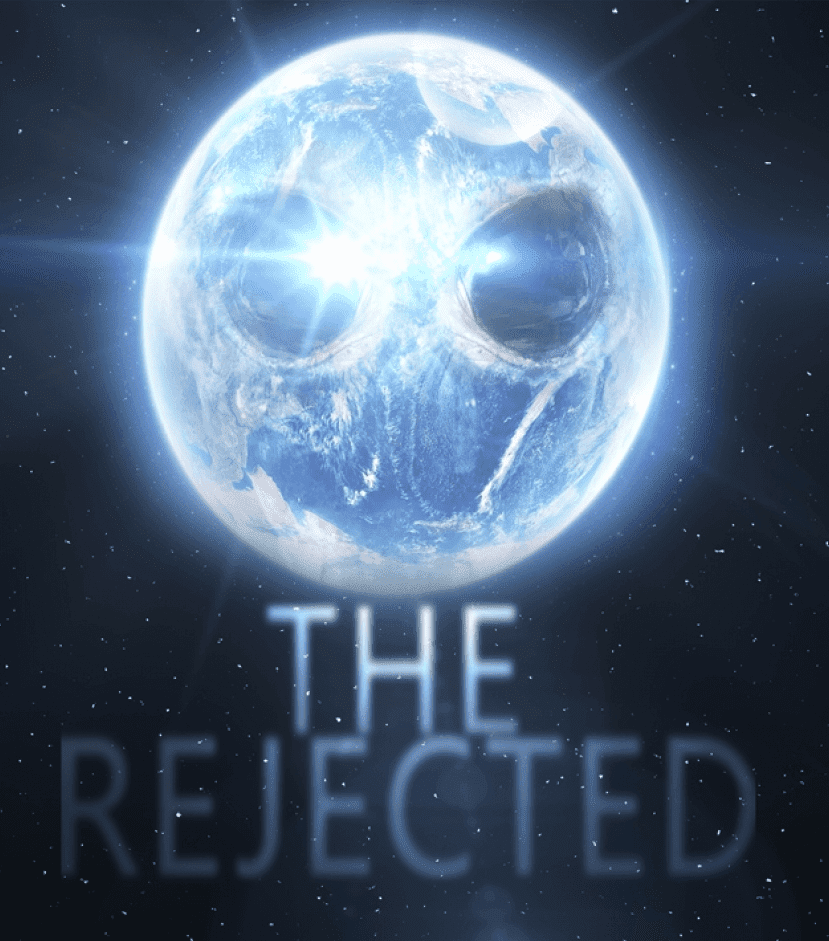 The police lined the streets on all sides, also paddy wagons, and what looked like the army. And all of them carried long futuristic looking shoulder rifles, which looked like ray guns from a bad science fiction movie. Jeff stopped his car and asked a police officer why they were out in force.

"We're a precaution. In case things get out of hand."

"Does this have something to do with the Balazons?"

The cop nodded his head. "Don't worry, sir. We've been prepared for the worst. Best thing for you is to get home and stay home. Things might be getting ugly soon." Jeff didn't pry further. The officer's look demanded he move on.

Ignoring the pain in his shoulder, Jeff drove the last few blocks as quickly as possible. When he got home, he cautiously opened the door to his house and peered inside. Valerie was talking to someone. He entered the living room and saw one of them.

Jeff pointed his finger and started to say, "I want you out," but stopped mid-sentence. He stared at the creature, dumbfounded for a short time. There could be no mistake.

"Hi, Monica," he said casually, as if he had expected to see her.

After a short pause he said, "I've already heard Khur-ak's explanations. I've thought about it a lot and come to the conclusion it's all a bunch of crap. I don't know what game you things are playing, but I know danger when I see it. Go away and leave us alone."

"It's too late for that, Jeff," Acin-om said. "We must make the best of the situation. You may not wish to accept us, but others will."

"What do you things really want? What's your hidden agenda? If all this stuff about conscience-bubbles is true, take mine out and let's see if I revert into a caveman. I dare you. You can't because it's not true."

"The effect of doing such a thing before you are ready would be disastrous. Besides, once we have implanted it, only the individual can remove it."

"I don't believe you. I don't think you have the power to do the things you say. Do some miracles. Rise up my dead grandmother."

"We can't reanimate a dead person once their essence has been deposited into a host body."

"Give me another test," Acin-om said.

"Why not make wine out of water." Jeff ran to the kitchen and came back with a glass half full. He handed it to Acin-om and it turned red.

Jeff did; it was indeed wine. He threw the glass across the room, staining the wall on impact. "I don't care about your parlor tricks! I don't trust you."

"I have the power to heal as well," Acin-om said and pointed at Jeff's injured shoulder, the mere reminder initiating a stab sensation that seemed to travel along his collar bone to the base of his neck.

It was then that Valerie noticed it too. "What happened?" she asked.

"Nothing. It's a long story." He turned to the Balazon. "Look, while I admit it might be nice to..." He stopped, curious that Acin-om suddenly decided to close her exaggerated eyes in mid-sentence. The alien seemed to be concentrating, as she lifted her long arm and pointed slender fingers in Jeff's direction. Then he noticed the pain was gone.

He tore off the shoulder dressing. Nothing. It was as though he'd never been shot.

Jeff sighed. "It doesn't change a thing." It was his heart that needed the miracle, but it wasn't one he thought the Balazons could provide. He went to the kitchen and stared out the window, trying to determine what it would take for him to let go.

When Valerie got up to follow him, Acin-om said, "It will take a while, but he'll come around."

She went over and hugged her husband from behind. "Please try and stay open-minded," she said. "Remember the cult? After that experience, you gave up on all mystical things. I thought you would like the concrete reality of what the Balazons represent. No more ambiguity to deceive you. They're being very direct and open."

There was no response.

Jeff didn't want to admit a part of him did believe, and after the horrible experience he'd had with the cult, he had totally given up on religion. It had been very difficult for Jeff to come to the realization that he was being lied to and manipulated by the religious group, and he couldn't shake the same sinister feelings he was receiving now about the Balazons. The aliens were lying and manipulating mankind. Jeff might not be able to prove it, but he could feel it, almost as clearly as he could feel the rough scar tissue that had healed over his own flame scarred forearm. He rubbed the area, raised and callous, something he liked to do when he needed a reminder to think for himself instead of following anyone else, human, alien, God...whoever.

Khur-ak was the cult leader and the rest of the aliens were his blind obedient followers, spinning their deceptive lies for some evil manipulative reason. The aliens would show their true colors eventually. The cult leader had also been slow to reveal his true evil nature but eventually it happened. He'd been down this road before, a road of light that seemed so deceptively right, but led to disaster. The only difference now was that the fancy Bible talk was coming from aliens that actually had some power to back up their claims with miracles.

But even if Jeff could dismiss the cultic overlay he was imagining on the Balazons, after the terrifying things the aliens had done to him, he didn't know if he could open up to them. They seemed so powerful after all. He could only shudder to imagine what else they might do to him if he let his mental guard down for a moment.

Jeff went back into the living room and sat down. Valerie followed him. "I was attacked today by a longtime customer of my store. Did Xsalma's followers take over his body?" he asked. "Wouldn't it have been more efficient to simply create a body, such as the one you made for yourself, and try to terrorize or kill me with that?"

Acin-om closed her eyes for several seconds, concentrated, and changed shape to become Monica. "To do this requires more mental energy than simply taking over a human host; they needed all they could to muster a proper attack. Besides, there is more terror in being inexplicably attacked by those you know."

Jeff's facial grimace conceded to Acin-om's statement. He remembered how horribly shaken he had been. "I don't claim to know everything, but I do know you creatures aren't as altruistic as you claim. Surely you don't need to resort to lying, deception, terrorism, and murder to help us poor earthlings out of our primitive condition. That makes you no better than us. If that's your idea of help, I'd rather not have any."

"You are presently incapable of comprehending our motives. Someday, if you become like us, you will understand."

"I understand better than you realize. Valerie, have you ever seen the movie 'V'?" Jeff stared at Acin-om. "It stands for Visitors. In it, aliens land on earth claiming to be friends, but in the end it turns out they need humans for food."

"Oh, Jeff," Valerie said. "Do you know how ridiculous that sounds?"

"No more ridiculous than what she's told me so far." He continued to stare at the Balazon, searching for some type of reaction, acknowledgment perhaps.

Acin-om started to say something, but then stopped. Jeff continued to vent his feelings.

"I suppose you don't. You'll have to trust us."

"No way. I'm going to call my friend Brian. I'm sure he'll want to interview me for his TV show. I'll tell the viewers about your assaults on me. We humans aren't as stupid as you think, Acin-om. When people like me start telling their stories, you'll see how determined and unified we can be at opposing evil beings like you."

Valerie sighed. "That's exactly what Xsalma and his followers were trying to do. Sow fear and mistrust so Khur-ak wouldn't unveil. Don't let some misguided aliens manipulate you like that, Jeff. Listen to Acin-om. I think you will find everything the Balazons have done up until now very logical and well thought out. They had no choice but to do the things they did."

"If enough people think like you, humans will automatically be condemned to extinction," Acin-om said. "You need our help to survive."

"We don't need anything from you. How do we know you're not lying to us again for some twisted reason? I may not be a genius but I trust my instincts."

"We are here to help humans, Jeff. The choice you and everybody on this planet must make is whether or not to accept that."

"I can't." Jeff turned to his wife, a sour look on his face. "What did they do to you to make you so agreeable? Did they take over your mind and body too?"

"Oh, Jeff," she said. "We must listen to them, or all dreams of immortality will be lost."

"I don't care," Jeff said. "Being mortal, maybe that's a good thing. At least I'd have a chance of dying a natural death instead of whatever these things have in store for me. Living forever would become boring."

"Be honest with yourself," Acin-om said. "Your own feelings reveal death is unwelcome. Search your heart and you will see the conscience-bubble is holding out the possibility of eternal life to you."

"I've got good reason not to trust your kind."

"You've got a point, Jeff. I'm terribly sorry about what happened. But if most of the people on earth think as you do, there will be little we can do for humanity."

If only Valerie could have experienced the full horror he'd gone through, she might understand. "I think I've heard enough," Jeff said. "I don't want to be here right now." He got up to leave.

"Where are you going?" Valerie asked.

"Out for some fresh air. Don't worry I'll be back." He would be back all right, back after contemplating what he should do next and fearing what that might be. He wasn't much of a fighter, but if he felt his life and family was in jeopardy, he would have to do something.

He quickly grabbed his coat and went outside. Neither Valerie nor Acin-om tried stopping or following him.